What are the sources of proteins 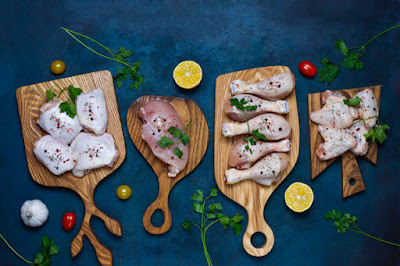 Protein is an essential component responsible for multiple functions in the body including building tissues, cells, and muscles. Protein with fats and carbohydrates is the main source of energy production that the body must perform vital processes. Proteins are made up of a group of twenty types of amino acids, of which nine are essential, meaning they must be obtained from food sources rich in protein, and other types are non-essential, i.e. can be manufactured inside the body.

Protein sources are varied; some are animal, some are plant-based, including:
Seafood and fish: Fish and seafood are among the best sources of dietary protein, in addition to containing omega-3 fatty acids that are good for the heart, unlike the rest of the animal protein sources, which are rich in proteins with high nutritional value and low fat.
Poultry meat: It is a good source of animal protein. The cut portions of skinless chicken breasts are considered to be low-protein sources of fat compared to red meat.
Red meat: Red meat is a rich source of protein, in addition to vitamins and minerals.
Eggs: Eggs are a source of high-quality protein, and it is also a source of inexpensive animal protein, and eating eggs at the breakfast table helps reduce the feeling of hunger for a long period of time.
Milk and dairy products: They are rich in protein, and also calcium and vitamin D needed for the bones.
Legumes: Legumes, such as beans, lentils, and chickpeas, are a good source of protein in food, as well as they contain dietary fibers that help digestion and give a feeling of fullness and satiety for a long period of time, as one cup of legumes contains a number of proteins Equal to those in ounces of grilled meat.
Soy: Soy milk and cheese made with tofu is a good alternative to other fat-rich proteins, in addition to helping to lower cholesterol and reduce the risk of heart disease.
Nuts: Almonds, hazelnuts, peanut butter, peanuts, pecans, sunflower seeds, and nuts are sources of rich in beneficial fats as well as containing a good percentage of protein.

Proteins are found in all tissues, and they are part of every process that occurs in the body, and they have many functions, including:
Antibodies are formed that are responsible for the body’s immunity, such as amino-globin.
Enzymes are responsible for chemical reactions in the body, such as phenylalanine hydroxylase.
The hormones responsible for transporting signals to cells and body organs are formed to stimulate them to perform their functions.
It involves the synthesis of cells and tissues and supports and causes muscle movement, such as actin protein.
It contributes to storing and releasing vital molecules in the body such as certain proteins.

The amount of protein required to be consumed daily depends on the weight of the individual and the type of physical activity practiced by it. A healthy average person is advised to obtain a rate ranging between (10-15%) of the total daily calories from protein, i.e. about one gram per A kilogram of body weight, while a pregnant woman needs about 10 grams or more, while a breastfeeding woman needs (20) grams of protein per day, to be able to produce milk in sufficient quantities for the infant. Athletes need more protein to build muscle, and the amount of protein needed for them depends on the type of exercise, duration, and intensity of training.

Despite the great importance of proteins in the body, they should be consumed in moderation without exaggeration. Some people depend on their diet for a diet rich in protein and poor in carbohydrates for several reasons, including weight reduction and muscle building.
Medical studies have proven that eating large amounts of protein is harmful to the body, especially if this diet is not associated with regular exercise. Increasing the number of proteins pushes the body to form toxic substances called ketones, and to get rid of ketones the kidneys are forced to work with additional energy, which exposes the body to losing large amounts of fluids and causing the body to dry out, and kidney fatigue is amid the subsequent symptoms:
Lack of calcium in the bones, which causes their fragility.
Feeling tired and dizzy.
Having bad breath in the mouth.
The higher the level of cholesterol in the blood, the greater the chances of developing heart diseases.
Increased chances of kidney stones.
Gout infection: Eating large amounts of animal protein leads to an increase in the production of boric acid that accumulates in the joints, causing severe pain.
Increased risk of cancer: Studies show that eating animal protein in large quantities encourages the liver to produce an insulin-like growth factor that in turn promotes the growth of cancer cells.
Lack of muscle mass.
Adopting a protein-rich diet poor in carbohydrates leads to a deficiency of vitamins and fiber.

Some people experience symptoms of allergic reactions when they eat certain types of food, and one of the most common types of food allergies is protein sensitivity. Protein sensitivity is defined as an abnormal reaction by the body's immune system to the protein present in some foods, for example, milk, eggs, peanuts, nuts, and shellfish.
An allergy occurs because proteins are not affected by cooking heat, or stomach acids and digestive enzymes, so they remain as they are without converting to amino acids, and they are absorbed and enter the bloodstream in the form of proteins, reaching the various organs in the body, which causes the spread of allergies throughout the body, represented by The immune system’s response to eating allergens by producing antibodies, causing allergic symptoms, as follows:
Sneezing and runny nose.
Itchy mouth, difficulty breathing and swallowing.
Abdominal pain.
Diarrhea or vomiting.
Beehives (also called urticaria, a symptom of a red rash with itchy skin).
Reduction of Blood pressure.
Lungs constriction.

Allergy is treated by avoiding the foods that cause it, using adrenaline injections in an emergency, and treatments to relieve allergy symptoms such as antihistamines and bronchodilators.
Next article Next Post
Previous article Previous Post